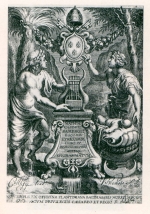 The selection of M.K.Sarbievijus poetry works comprises works created at different periods of life, demonstrates their diversity in styles, themes, and esthetics. The arrangement of works corresponds to the structure of poetical works' selections that were published during poet's life.

In his first creative period M.K.Sarbievijus had mostly written panegyrics, and several epithalams could be mentioned as well.

In the second period of his creative life M.K.Sarbievijus gradually retired from void rhetoric, converting his thought to rationality, and the means of expression to lucidity. The years spent in Rome were decisive. There the poet obtained direct insight of Italian culture, ancient architecture, sculpture and arts; he studied manuscripts of famous authors of Antiquity and antique literature. The verses written in Rome were collected in the first selection of M.K.Sarbievijus Lyricorum libri tres (The Three Books of Lyrics) that was published in the year 1625.

The works of the third period could be described as "literary diversions": having intention to compose a blend of various styles, cultures, and ideas, M.K.Sarbievijus writes parodies and palinodes on antic and biblical texts.

The themes of M.K.Sarbievijus's poetical works can be grouped into several blocs. First of all, there are verses imitating works of Horatius. M. K Sarbievijus imitates the style, prosody, composition of Horatius and recurs to his plots and mythological notions. Still, while sustaining the general principles of Horatius's poetics, M.K.Sarbievijus frequently transforms the content of verses and replaces the allusions of Antiquity with the Christian ones.

The second group consists of verses based on imitation of The Song of Songs.

Minor groups worth mentioning consist of dedications to his scholar friends and members of the Jesuit order, and lyrical miniatures about the beauty of the nature full of hints towards the history, culture, and philosophy of ancient Greece and Rome.

In M.K.Sarbievijus works much attention is paid to topics concerning Lithuania. In his panegyrics dedicated to Lithuanian nobles and in other verses frequent are Lithuanian names of places and persons and descriptions of the beauty of Lithuania's nature.

The poetry of M.K.Sarbievijus, according to the requirements of classical rhetoric, educates, excites and delights its readers of all times.