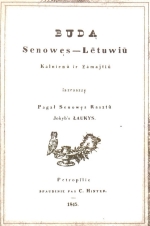 "The Character of Lithuanians, Higher and Samogitian, of Old Times" by S.Daukantas is one of the four historiography works by him. He had published it himself in St. Petersburg in 1845. The other three works are based on chronological sequence of events, this one reviewed the life of ancient Lithuanians synthetically and from different aspects.

The past of his homeland was a living source that gave spiritual and moral strength for S.Daukantas, awakened the national consciousness and helped in the fight for its existence. The author of "The Character..." tried to express the Lithuanian national character, to explain the material and spiritual life of the ancient Lithuanians, their social order. S.Daukantas tried to draw a synthesised picture and looked for material to it not only in written documents but in traditions and folklore of Lithuanian peasants and retrospectively imagined the ancient past. He tried to describe the existence of a nation, free from exploitation in the past. The life of ancient Lithuanians was shown in the greatest contrast with serfdom and tsarist despotism. S.Daukantas was against any oppression and, in his opinion, freedom was a natural right of a man. S.Daukantas had described the ancient Lithuanian as a resolute defender of his social and political freedom. This parallel was one of the most valuable points in S. Daukantas' worldview. The author had not made any distinction among Higher or Samogitian Lithuanians or other Baltic tribes neither in the present, nor in the past and had stressed that they belonged to one nation.

View .pdf
.epub
.mobi
About author
Simonas Daukantas is one of the most prominent Lithuanian cultural and literature workers of the 19th century, the first professional historian who was the first to write historical works in Lithuanian. He was active in the field of Lithuanian history and folklore, made several translations and imitations of fiction prose, and wrote many booklets and manuals of practical character. Read more
Contents