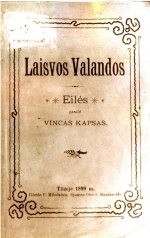 V.Kudirka had written some lyrics: 10 original poems, a dozen fables ­ imitations of other authors, and some translated poems. These are included in a collection "Leisure Hours" (1899). The title of the collection implied that the verses were written in between more serious works, at leisure. However, these rare examples of V.Kudirka's poetry were very significant in his creative work. All of them were marking certain programmes, occasions, significant ideas, and may be entitled a diary of national renaissance. The poems were meant to signify important events of life: "Beautiful, more beautiful, most beautiful" ­ for the establishment of the Society "Lithuania"; "Labora!" for graduation from the University; "The Bell" ­ to the first issue of the newspaper "Varpas" (The Bell), and for the tenth anniversary of the same newspaper ­ "The National Song". After the release from the Kalvarija prison he had written the poems "For Valeria" and "To My People". "The National Song" by V.Kudirka had become a national anthem of Lithuania. V.Kudirka had expressed the ideals of Lithuanian nation in it, generalised the ideas that he publisized in his writings.

In Satires V.Kudirka had sought practical purposes: to stimulate and encourage Lithuanians to fight Russification and Lithuanian oppressors. A sharp pen of V.Kudirka had threatened everyone who ruined the economy and culture of Lithuania. He considered the economic revival and development of Lithuania to become the foundation for its national renaissance. Economic and cultural processes went together. The facts of life that he had used in his satires were so anecdotal and typical that there was not a single example of exaggeration. However, the satires by V.Kudirka are not a description of reality, they had become an image, a picture. The actors and events are typical and consciously deindividualised. These satires were a documentary prose. The word of the writer discloses human vices and social wounds, provoke and appeal to the conscience of a person and society. V.Kudirka had built his satires on real events and each personality had its prototype in real life.

V.Kudirka had influenced the revival of Lithuanian nation and this influence reached our days. His ideas are still alive and important, because he has correctly marked the way of a cultural renaissance and seeking freedom for a nation.

View .pdf
About author
Vincas Kudirka was born in Vilkaviškis district, village of Paežeriai to a family of a wealthy farmer on December 31, 1858. He went to the primary school at Paežeriai. After graduating from the school in 1871, V.Kudirka entered the Marijampolė high school where he began to write verses in Polish. Read more
Contents LAISVOS VALANDOS