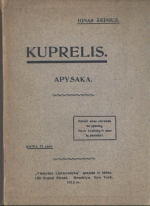 A psychological novel "The Hunchback" was written around 1910. It is the peak of I.Šeinius creative work. This book is very different from other fiction stories. The attention is concentrated upon the inner individual world of a person, upon his moods, spiritual state, thoughts that appear and disappear. The novel "The Hunchback" speaks of the beginning of national renaissance in Lithuania, however, the national issues remain in the background, they are not dominating.

I Šeinius called "The Hunchback" "a tale of one spring day". He described a life and love story of Olesius who was physically disabled but emotionally rich. In the novel, as in many impressionistic works, the nature is very important. Even the wind-mill, that is only an occasional feature of a landscape and has no forecasted role in the story, becomes a constant and living motive in the high and low tides of Olesius tragedy. It is pulsating with the rhythm of the storm and is incorporated into the fabric of the story. The nature of I.Šeinius is alive, intensive, "conscious", creative and participative. It is the God and "the spirit of the world" at the same time. The impact of German idealistic philosophy on the life concept of Olesius (which is, of course, identical to the one of the author) is strongly felt.

I.Šeinius had created a prototype of a modern Lithuanian novel to which a personal, not a national, tragedy is central. In this particular case it was a story of unfortunate love. The later fiction writers learned how to write a love story from "The Hunchback".

"The Hunchback" is one of the most outstanding works in Lithuanian fictional prose because of its historical significance and authenticity.