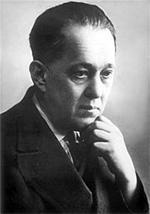 Vincas Krėvė (Mickevičius) was a creator of universal daring and various genres, he combined realistic details with romantic inspiration, merged wisdom of his own nation and the Orient, created historical works, interpreted the Bible, started the literary folklorism, was a writer of a wide amplitude.

Vincas Krėvė-Mickevičius was born on October 22, 1882, in Subartoniai village, Alytus district. The villagers called Mickevičiai family Krėvės, and for this reason the writer has chosen his pseudonym ­ Krėvė. For a long time he had a double name Krėvė-Mickevičius, but in America he was officially known as Vincas Krėvė.

V.Krėvė was taught by a village teacher and at the school of Merkinė. He took private lessons in Vilnius, and in St. Petersburg he passed the exams of four years in gymnasium. In 1898 he entered the clerical seminary in Vilnius. However, he did not feel any dedication and left seminary after two years. In 1904 V.Krėvė had entered Kiev University and studied philology. In 1905 the University was closed and he moved to Lvov University in Galicia (Austria), but did not cut his relations with Kiev University. In 1909 he graduated Lvov University with a degree of the doctor of philology, passed the exams at Kiev University and was invited to start preparations for a professorship. However, the salary at the University was very small and he had left for Caucasus and started teaching Russian language and literature at a gymnasium in Baku city. In 1913 he had defended the dissertation at Kiev University and was awarded a Master's degree in comparative linguistics. In 1919 V.Krėvė was an ambassador of Lithuania in Azerbaijan.

In 1920 V.Krėvė had returned to Lithuania and settled down in Kaunas. He worked in the Ministry of Education as a Secretary of the Book Publishing Commission, as a professor at the Lithuanian University, the Faculty of Humanities. In 1925-1937 V.Krėvė was a Dean of this Faculty, edited scholarly publications of the Faculty and literary journals. V.Krėvė participated actively in social and political life. In 1940 after the Bolsheviks had occupied Lithuania, V.Krėvė was a Minister in the so-called people's government, but had quitted that post very quickly. Having retired from politics he worked at Vilnius University and was appointed the President of the Academy of Science.

In 1944 V.Krėvė had departed to the West. For some time he lived in Austria. In 1947 he moved to America and settled down in Philadelphia. At Pennsylvanian University he taught Russian and Polish languages and literature. He died on July 7, 1954.