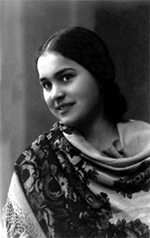 Salomėja Nėris is the most prominent poetess who formed during the years of independence (1918-1940), and reached the heights of the art. The pureness of emotion, the sheerness of form and melody really makes her resemble to a singing nightingale, though without special deepness of thoughts, but attractive by the candor of her heart. Still, the involvement of S.Nėris in the tenets of bolsheviks and her paying the tribute to communist propaganda stains her person and her works.

Salomėja Nėris (Bačinskaitė-Bučienė) was born on October 17, 1904 in the village of Kiršai in Vilkaviškis district. She attended the primary school at Alvitas, and since 1918 studied at Marijampolė gymnasium. In 1919 she was transferred to the fourth form of Vilkaviškis "Žiburys" (The Light) gymnasium. At gymnasium she was famous as an artist and a poetess, participated in the activities of the circle of "Ateitis" (The Future - a movement of Catholic youth). Her first verses were signed under the pseudonyms Liūdytė and Juraitė, since 1923 - under the pseudonym Salomėja Nėris. After finishing the gymnasium in 1924, S.Nėris entered University of Lithuania, the Faculty of Theology and Philosophy, where she studied Lithuanian literature. At the same time she studied German language and literature, pedagogy and philosophy, and participated in the activities of arts society "Šatrija" of students belonging to "Ateitis". In 1927 was published the first selection of S.Nėris's verses. In 1928 S.Nėris graduated from the University and was appointed to teach German language at the "Seinų Žiburys" gymnasium in Lazdijai. During her vacation the poetess went abroad to the Western Europe and improved her knowledge of German.

In 1931 S.Nėris moved to live in Kaunas, where she gave lessons and edited Lithuanian folk tales. In the second collection of S.Nėris's poetry, "The Footprints in the Sand", one can already spot the verses that assert the oncoming spiritual crisis. In the same year the verses containing revolutionary motives were published in the procommunist literary journal "Trečias frontas" (The Third Front). There was also published her promise to work for bolsheviks, only it was written not by S.Nėris herself.

In 1934-1936 S.Nėris taught at the girl's gymnasium at Panevėžys. By the end of 1936 she married and lived in Paris till 1937. After coming back to Lithuania she was appointed to teach at the 3rd gymnasium of Kaunas. She settled in Palemonas. In 1938 was published the best book of S.Nėris's verses, "I Will Turn into the Absinth Flower" for which she was honoured with the State literary award.

The occupation of 1940 meant the tragic culmination of S.Nėris's life. She was appointed the member of the so called "People's Seimas" (Parliament), and also elected to participate at the delegation that went to the Supreme Council of the Soviet Union to appeal for adoption of occupied Lithuania into the Soviet Union. She was also assigned to write a poem glorifying Stalin. The poetess did write such a poem. She also wrote more verses on the themes dictated by the communist party. Until now there are many different opinions whether she was totally loyal.


After the beginning of the World War II S.Nėris was evacuated to Russia. In 1944 she returned to Kaunas, but fell seriously ill and died at hospital in Moscow on July 7, 1945. She was buried in Kaunas, in a square of the Museum of Culture, and later buried in the cemetery of Petrašiūnai.