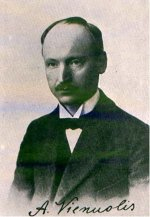 One of the great Lithuanian writers Antanas Žukauskas-Vienuolis was born on April 7, 1882, in Užuožeriai village, Anykščiai district, in a family of a wealthy farmer. He was closely related to A. Baranauskas and J. Biliūnas. He had attended the school of Anykščiai district. In 1895 he had entered the first class of Liepoja gymnasium. His parents and his financial supporter A. Baranauskas hoped that he will become a priest. However, A. Vienuolis didn't feel any vocation. In 1900 he went to Moscow and started working as an apprentice in a pharmacy. After acquiring the rights of a professional pharmacist, A. Vienuolis went to Caucasus in 1903. He worked in pharmacies. In 1905 he participated in the revolutionary movement on Tbilisi, got arrested and was exiled to Vladicaucasus. He stayed there till 1907. His literary work was started in Caucasus. The first short story was published in 1907.

In 1907 A. Vienuolis settled down in Moscow again. He worked in the pharmacies and studied pharmacology at the University, attended the lectures on literature. He took part in the activities of the Society of Lithuanian students, co-operated in the magazine Aušrinė, during the First world war he worked in the Committee of support to the victims of war.

In 1918 A. Vienuolis returned to Lithuania and lived in Kaunas. He worked as a correspondent for different newspapers, in the Book Publishing Commission of the Ministry of Education. From 1922 A. Vienuolis moved to Anykščiai and bought his own pharmacy. He looked after the hut of A. Baranauskas and his literary heritage, participated in literary life, maintained relations with other writers. The occupation had struck A. Vienuolis with disasters ­ his pharmacy was nationalised, his son deported to Siberia. The writer himself had to serve with his literary work the new regime. Following the Marxist ideology he had written a story A Foster Daughter and a novel Puodžiūnkiemis. A. Vienuolis was awarded the title of The Writer of Lithuanian People.