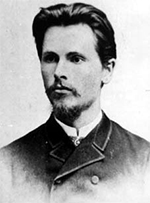 Vincas Kudirka was born in Vilkaviškis district, village of Paežeriai to a family of a wealthy farmer on December 31, 858. He went to the primary school at Paežeriai. After graduating from the school in 1871, V.Kudirka entered the Marijampolė high school where he began to write verses in Polish.

After finishing the 6th form, under the pressure of his father, V.Kudirka entered the Seinai Clerical Seminary. He was excluded from the Seminary after two years. Although his father had dropped the material support, V.Kudirka continued his studies at the Marijampolė high school where he began to edit a satirical paper in Polish "Kłamstwo" (The Lie).

In 1881 V.Kudirka graduated from the high school with a silver medal and, although this award granted him a scholarship at Moscow University, he went to study at Warsaw University. At the beginning he studied at the History and Philology department, but later he passed on to the School of Medicine. He earned his means of subsistence by giving private lessons and by copying manuscripts.

In 1885 V.Kudirka was arrested, imprisoned and excluded from the University for preparing the manuscript of K. Marx's "The Capital" for the hectograph copying. In 1887 he returned to the University and graduated from it in 1889. In 1888 V.Kudirka organized a clandestine society of Lithuanian students in Warsaw "Lietuva" (Lithuania). The society began publishing a monthly newspaper "Varpas" (The Bell), and V.Kudirka was its editor for several years.

In 1890-1894 V.Kudirka was a doctor at Šakiai. There he was writing his literary works, collecting Lithuanian folklore, composing musical works. After falling ill with tuberculosis, by the end of 1894 he went to Yalta (Crimea) for a treatment, but returned to Lithuania in 1895 for the lack of money. He settled down in Naumiestis and dedicated himself to literary activities. In the same year he was arrested for his pro-Lithuanian activities, but was released soon. As his health depleted further, V.Kudirka went to Sevastopol (Crimea) in 1895. In spring of 1896 he returned back to Naumiestis. V.Kudirka died on November 6, 1896 in Naumiestis (Kudirkos Naumiestis now), where he was buried.

Laisvos valandos. Satyros
Early period (up to the end of the XIX century)