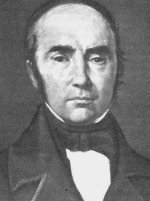 Simonas Daukantas is one of the most prominent Lithuanian cultural and literature workers of the 19th century, the first professional historian who was the first to write historical works in Lithuanian. He was active in the field of Lithuanian history and folklore, made several translations and imitations of fiction prose, and wrote many booklets and manuals of practical character.

S.Daukantas was born in the year of 1793 in Kalviai, Kretinga district, to the family of court forester. In 1808-1814 he went to the school of Dominican monks at Kalvarija. Later on in 1814-1816 he studied at a high school in Vilnius. In 1816-1825 S.Daukantas studied literature, law and history at Vilnius University. After graduating with a master's degree, in 1825 he departed to Königsberg where he researched the archives and attended the lectures of history. In 1825-1826 he served at the office of the Governor-general in Riga. He was not satisfied by his service, because he had no free access to the archive of Riga magistrate where the documents on Lithuanian history were kept. Since 1835 he worked in St.Petersburg as a Senate department officer (a deputy for the head of the Lithuanian Metrics office). There he studied Lithuanian Metrics in the archives and collected materials for the history of Lithuania. While S.Daukantas lived in St.Petersburg (1834-1850), a centre of Lithuanian cultural activity was formed there. S.Daukantas has published almost all his books during this period, vacation time was spent in Samogitia where he collected folklore with his helpers, took care of Lithuanian schools and textbooks.

In 1850 S.Daukantas returned to Lithuania and retired in 1851. He settled down in Varniai with bishop M.Valančius. Both of them dreamed of great works and establishment of Samogitian Academy. In 1855, following some controversy with M. Valančius, S.Daukantas moved from Varniai to Latvia, to Viekšniai and Skuodas. In 1861 he moved to Papilė, where died in 1864.

The main fields of S.Daukantas work were: history, folklore, translations and imitations, textbooks, language, publications on household and farming. He had published more books than any other Lithuanian cultural worker.