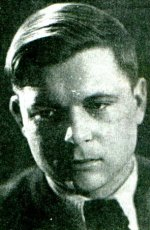 Petras Cvirka, one of the most prominent writers of the first half of the 20th century, a representative of realism, was born on March 12, 1909, in the village of Klangiai of Veliuona community, Kaunas district. In 1926 he finished Veliuona progymnasium, in 1926-1930 studied at Kaunas Art School. P.Cvirka did not become an artist, instead he gave himself up to literature. His first verses were published in periodicals in 1924. In 1928 he published a book of verses "The First Mass", and it was confiscated. In 1930 he published a collection of stories "The Sunset in the Community of Nyka". In 1930-1931 P.Cvirka participated in the activities of a worker's club "Viltis" (The Hope), cooperated with the journal "Trečias frontas" (The Third Front). In 1931-1932 the writer lived in Paris, where he studied literature and arts. In 1934 he was admitted to the Society of Lithuanian Writers, and in 1936 he took part in the edition of the "Literatūra" (Literature) magazine. In 1936 he visited Moscow and Leningrad, in 1937 - Western Europe, where he made connections with French writers. In 1938 and 1939 he visited Soviet Union, where acquainted the writers of this country, again. In 1939 he was a secretary of the Society of Lithuanian Writers. A member of the Union of Lithuanian Soviet Socialist Republic Writers since 1940, in 1940-1941 he was a chairman of its organizing committee. After the beginning of the Great Patriotic War he lived in Kirov district, Saratov, Alma-Ata, and since 1942 - in Moscow. He participated in the activities of the Union of Writers of the USSR. In 1944 P.Cvirka returned to Lithuania. In the years 1945-1947 he was a chairman of the board of the Union of LSSR writers, at a certain period edited magazine "Pergalė" (Victory).

The first book of verses "The First Mass" (confiscated) appeared in 1928. The first selection of stories "The Sunset in the Community of Nyka" appeared in 1930.