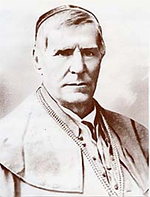 The originator of Lithuanian fiction prose M. Valančius was born on February 16, 1801, in a village of Nasrėnai near Salantai (Kretinga district) in the family of a rich peasant. He studied at the Dominican School in a town of Žemaičių Kalvarija, Varniai Clerical Seminary, and at Vilnius Clerical Academy. In 1828 M. Valančius became a priest. He was holding high posts as a professor at Vilnius and St. Petersburg Clerical Academies, rector of Varniai Clerical Seminary, and in the year of 1850 he became the Bishop of Samogitia. He wrote a valuable historiographical work "The Diocese of Samogitia" (1848) in two volumes, compiled a collection of "Samogitian proverbs" (1867), and published more than ten books for religious purposes.

Being a bishop, M. Valančius accomplished much in the sphere of public education and culture. He was establishing parochial schools, took care of publishing and distribution of Lithuanian books, organized a wide net of temperance societies that tried to divert the peasants from alcohol.

M. Valančius started his active literary career immediately after the interdiction of Lithuanian press. He published such books of prose as "The book of Children" (1864), "The book of Adult People" (1868), "Juzė from Palanga" (1869), "The Narration of Antanas the Franciscan Observant" (1872), "The Lives of the Saints" in two volumes (1858-1868). Among his contemporary didactic Lithuanian prose M. Valančius's works were distinguished by their literary values. M. Valančius laid the grounds of a Lithuanian realistic prose of higher quality that became dominant in Lithuanian literature of the last decade of 19th century.

His works were published under the name of Valančiauskas.