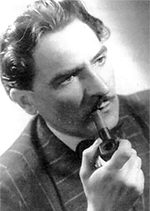 Albinas Marius Vaitkus, who later called himself Marius Katiliškis, was born on September 15, 1915, in Gruzdžiai. He attended a school at Žagarė, worked as a librarian, and also did the physical work.

He began to publish his stories in Lithuania already, since 1932, in magazines "Karys" (The Soldier), "Trimitas" (The Trumpet), and "Naujoji Romuva" (The New Romuva). He was a librarian in Pasvalys, where he made a wide acquaintance with the world literature.

In 1944 M.Katiliškis retreated to Germany. Here for some time he studied arts at Freiburg. In the same year he prepared for print a collection of stories "The Return of a Veteran Soldier", but in the confusion of war the manuscript was lost. In 1948 in Germany he published the first selection of stories "The Hour of Cross Passing". In 1949 the writer emigrated to the USA and settled in Chicago, where worked at several factories. In Chicago, at a publishing house "Terra" managed by V. Civinskas, were published all the books of M.Katiliškis: the novels "The Lee", "The Autumn Comes through the Forests", "The Goners Shall not Return", and the collections of stories. M.Katiliškis had won the literary awards of Lithuanian Encyclopedia Publishing House, Society of Lithuanian Writers, and of "Santara-Šviesa" society.

After long and toilsome diseases M.Katiliškis died on December 17, 1980.