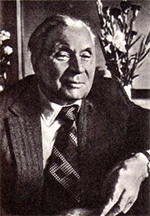 Juozas Grušas is an author of stories on existential topics and plays of various types. He wrote according to the tragic and tragicomic principle. Characteristic of his works are moral problems and moral self-consciousness. In his style he blended the constructive form and the power of generalization.

J.Grušas was born on November 29, 1905, in Žadžiūnai-Kalniškiai village of Šiauliai district. His first teacher was poet Jovaras, who taught him to read and to write, and directed towards literature. He finished Sutkūnai primary school just before the World War I. After learning privately, J.Grušas entered the fourth grade of Šiauliai gymnasium in 1920. In 1924 he finished gymnasium and entered the Faculty of Theology and Philosophy of Kaunas Vytautas Magnus University. There he studied Lithuanian language and literature, German literature, and pedagogy. At the beginning of his creative path J.Grušas wrote verses that were published in newspapers since 1925, but soon he turned to the prose. After graduating from studies in 1931 he taught Lithuanian language at the Jewish school-teachers pedagogical courses in Kaunas, and later until 1939 he was an editor of the Catholic daily "Mūsų laikraštis" (Our Newspaper). In 1938-1939 J.Grušas was a chairman of the Society of Writers, in 1940-1941 he was an editor at the State Publishing House. During World War II J.Grušas lived in Joniškis.

In the post-war years J.Grušas was ill for a long time, and wrote almost nothing. He recovered, and since 1956 began the most creative period in the writer's life. He wrote drama pieces mostly.