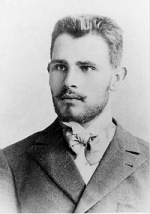 Jonas Biliūnas is a founder of lyrical Lithuanian prose. He was born on April 11, 1879, in Niūroniai village of Anykščiai county in a family of wealthy farmers. A local teacher had prepared J.Biliūnas for gymnasium. In 1819-1899 he studied at Liepoja gymnasium and became active in political and social life. The parents of J.Biliūnas died in 1893. J.Biliūnas turned down the proposal to enter the clerical seminary and had lost the financial support of his relatives. He gave private lessons. In 1990 J.Biliūnas had entered the Faculty of Medicine at Tartu (Dorpat) University. He was expelled from the University in 1901 for taking part in students' demonstrations. In 1901-1902 he lived in Liepoja, Šiauliai and Panevėžys, gave private lessons, wrote to Lithuanian periodicals. In 1903 he was admitted to Higher Trade School in Leipzig. Besides studies he was interested in literature and in 1904 he entered Zurich University to study literature. In 1905 his health had declined and J.Biliūnas had returned to Lithuania. He left for Zakopane the same year for medical treatment. He spent summers in Lithuania (Niūronys, Rozalimas, Kačerginė). During this time he wrote much. The first book "Various stories" was published in 1906. He wrote literary critics, historical and journalistic articles, popular and political brochures.

J.Biliūnas died in Zakopanė on December 8, 1907. His remnants were moved to Lithuania in 1953 and buried in Liūdiškiai mound not far from Anykščiai.