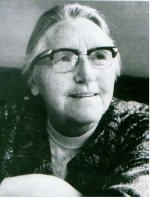 Ieva Simonaitytė is a writer from Klaipėda district; an author of autobiographic tales and novels, she depicted everyday life and exceptional destinies of "lietuvninkai" - Lithuanians from Lithuania Minor. Her life and creation resembles Žemaitė's way. Both writers have attained their education through reading of books, their experience of life and their inborn gift to watch the environment and people is the source of creativity for both of them.

Ieva Simonaitytė was born on January 23, 1897, in the village of Vanagai, Klaipėda district. Being five years old, she became ill of the bone tuberculosis, thus she could not attend the school. To read and to write she was taught by her mother. In her youth, walking on sticks, she had to work: to pasture the geese that did not belong to her, and look after small children. In 1912-1914 I.Simonaitytė was cured at Augenburg sanatorium in Germany. She returned from there healed. She worked as a seamstress, and gradually joined the Lithuanian activities: worked a the society of Vanagai Lithuanians "Eglė" (The Fir-tree), cooperated in "Tilžės keleivis" newspaper and in other publications of Lithuania Minor.

In 1921 I.Simonaitytė moved to Klaipėda. Supported by A. Bruožis and other patriots, she finished the evening courses of typists and stenographers. I.Simonaitytė worked at the Lithuanian consulate, as a corrector in "Rytas" (The Morning) printing house, at the editorial board of periodical "Prūsų lietuvių balsas" (The Voice of Prussian Lithuanians), and later in the office of Seimelis (local parliament) as a typist and translator.

The turn for literature in I.Simonaitytė became obvious very early. Her small works were published in newspapers of Lithuania Minor, but up till 1935 her name was unknown in the world of literature. In this year she was granted a State literary award for the novel "The Fate of Šimoniai Family from Aukštujai". Since 1936 I.Simonaitytė dedicated herself to the literature work entirely; she was granted a state pension. In 1938-1939 the writer was undergoing a treatment in Switzerland. When Germany tore away Klaipėda district from Lithuania, I.Simonaitytė settled in Kaunas.

I.Simonaitytė lived in Vilnius since 1963. In 1967 she was awarded with the honorary title of People's Writer of Lithuanian SSR.