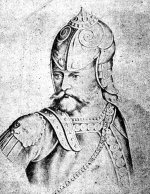 The father of Gediminas was Pukuveras - Butvydas, and on the throne he succeeded after his brother Vytenis.

During the rule of Gediminas was consolidated authority of the Grand Duke, strengthened the whole system of state institutions, were created conditions for development of agriculture and growth of the cities, expansion of trade and commerce, advance of culture. Gediminas turned Vilnius into a permanent capital of the state and a city of European significance.

During the years of his reign Gediminas was the most honoured ruler in Eastern Europe. In his time the aggressions from the West, of European knights, and from the East, of the Golden Horde, were warded off, and many Russian lands were incorporated into Great Duchy of Lithuania.

During the rule of Gediminas, in 1336, took place a battle of Pilėnai, which became a symbol of Lithuanian patriotism. Brother of Gediminas, Margiris, was in command of the defense of Pilėnai castle. The defenders, seeing that they will not be able to withstand, set the castle on fire and killed themselves to the last person, including Margiris and his wife.

Gediminas had made two attempts (in 1323 and in 1341) to get baptized and implement Christianity (Catholicism) in Lithuania, as did Mindaugas in 1251, but both times unsuccessfully. Most vigorously to these intentions objected heathen Samogitians and orthodox Russians. Supposedly, some group of conspirators finally killed (poisoned) him.