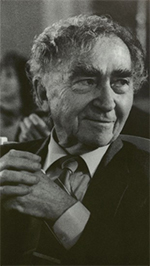 Bernardas Brazdžionis is one of the most prominent poets whose personality was formed during the years of independence (1918-1940), a classic of Lithuanian literature. He is one of the few Lithuanian writers whose status extends beyond the sphere of literature: he became an historical figure symbolically representing the strength and the spirit of resistance of the Lithuanian culture in the years of distress.

B.Brazdžionis was born on February 2, 1907 in the village of Stebeikėliai near Pumpėnai, Biržai district. In 1908 his family emigrated to the USA, but in 1914 returned back to Lithuania. B.Brazdžionis attended primary schools at Žadeikiai and Pasvalys. In 1921-1929 he was studying at Biržai gymnasium. B.Brazdžionis began to write and publish his poetry in 1924. In 1929-1934 he studied Lithuanian language and literature, together with pedagogy, at Kaunas Vytautas Magnus University, in the Faculty of Humanitarian Sciences. Here B.Brazdžionis found a wide field for his literary work and interests. He took part in the arts society "Šatrija" of students belonging to "Ateitis" (The Future - a movement of Catholic youth), in the Section of Humanitarian Students, and was its chairman in 1931. In 1933 he was editor of the newspaper "Lietuvos studentas" (The Student of Lithuania). After graduating from University, B.Brazdžionis taught Lithuanian language at various courses and schools. In 1937-1939 we worked at the "Sakalas" publishing house, and in 1940-1944 he was a curator of Maironis literary museum in Kaunas. He was an editor of many social and literary magazines - "Ateities spinduliai" (The Rays of the Future) in 1932-1940, "Pradalgės" (The Windrows) in 1934-1935, "Dienovidis" (The Meridian) in 1938-1939; he also published articles of literary criticism and book reviews, and books of children poetry. The collection of B.Brazdžionis's verses "The Signs and the Wonders" had won a literary award of the "Sakalas" publishing house, and another book, "The City of the Dukes" was honoured with the State literary award.

In 1944 B.Brazdžionis retreated to the West. In 1944-1949 the poet lived in Ravensburg (Germany) and took part in the cultural life of exiles from Lithuania, published a collection of verses. In 1949 B.Brazdžionis moved to live in the USA. For some time he stayed in Boston, where he worked as editor of the World Literature Department in the Lithuanian Encyclopedia and as a linotype operator. After moving from Boston to Los Angeles, he was editor of the magazine "Lietuviø dienos" (The Days of Lithuanians). B.Brazdžionis published many of books of verses in America.