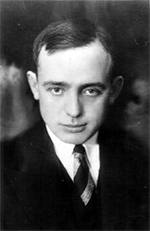 Antanas Miškinis is a poet of modern neoromantic style, whose programme sought to blend the poetical and spoken languages, who conversed the folklore tradition into literary culture, blended the melodic experience with vanguardist poetics.

Antanas Miškinis was born on January 29, 1905, in the village of Juknėnai, Utena district. In 1914 he entered Daugavpils Realgymnasium, but had to cancel his studies because of war. In 1921 A.Miškinis entered Zarasai progymnasium and finished it in 1922. In 1923-1926 A.Miškinis studied at Kaunas "Aušra" (The Sunrise) gymnasium, and entered Kaunas Vytautas Magnus University, the Faculty of Humanitarian Sciences. To write poetry he began in gymnasium, and the first verse was published in 1925 in a periodical "LIetuvis" (The Lithuanian). After graduating from studies in University in 1931, A.Miškinis was appointed to serve his military duties. In 1935 he had got a diploma of graduating from University, and began to teach Lithuanian language and literature at the 5th Gymnasium of Kaunas. At the same time he was an editor at the State radio. He was an activist in The Society of Lithuanian Writers, read his poetry at the literary evenings, cooperated in the periodical "Literatūros naujienos" (The News of Literature) and in other cultural newspapers and magazines, also published the books of his verses.

In 1945-1948 A.Miškinis was an editor at the State Fiction Literature Publishing House, and joined the movement of the anti-Soviet resistance. In 1948 he was arrested, sentenced to death in absentia, and later was deported to Siberia. Only in 1956 he was allowed to come back to Lithuania. There is a ten-years break in works of A.Miškinis. During exile in Siberia a poet had created one of the most powerful works of Lithuanian resistance - a cycle of verses (published in 1989). After coming back to Lithuania the poet could write only the optimistic verses, or neutral verses about nature, or translate into Lithuanian works of various authors, and write memoirs as well.