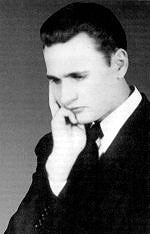 Algimantas Mackus was born on February 11, 1932, in Pagėgiai, to a family of postal executive. There A.Mackus began to go to the primary school. In Pagėgiai the family lived until March 22, 1939, when Klaipėda district was occupied by Germany. Later they lived in Tauragė, Vilkaviškis, and Vilnius. In Vilnius A.Mackus finished primary school. In 1944 the family of Mackus retreated to Eastern Prussia. They lived in the camps for deported persons in Germany. A.Mackus went to the Lithuanian gymnasiums in camps of Würzburg, Schweinfurt, and finished gymnasium in Schwäbisch Gmünd. In the spring of 1949 the family emigrated to the USA, and settled with their relatives in a town of Cicero, near Chicago.

For some time A.Mackus worked physical labour. He was associated with Lithuanian intellectuals in exile, vigorously participated in cultural activities. In 1950 was published the first modest selection of A.Mackus's verses "Elegies". In 1954 he began to cooperate at the literary radio broadcast "Pelkių Žiburėlis" (Will-o'-the-wisp), and later became its editor. In 1957-1958 A.Mackus studied Russian language and literature, as well as psychology, at Roosevelt University. In 1957 he began to work as announcer at "Margutis" (The Easter Egg) radio station, vigorously participated in activities of liberal academic organizations "Šviesa" (The Light), "Santara" (Concord). His main concern was to organize a foundation which would publish the books of most talented authors.

In 1961 A.Mackus became an editor of "Margutis" radio broadcast and magazine. He attached much attention to the problems of theatre.

A.Mackus perished in the road accident on December 28, 1964, in Chicago.