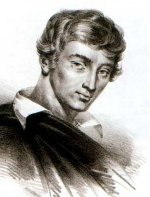 Adomas Mickevičius (Adam Mickiewicz) is a writer of the world renown who was writing in Polish and is one of the most prominent representatives of Romanticism in world literature. He was born in Zaosie nearby Naugardukas now Bielorussia), on December 24, 1798. His father was a land-surveyor of Minsk and also worked as a barrister at the court of justice in Naugardukas, his mother was a daughter of the estate supervisor. The family had estates of Harbatowicze and Zaosie, and the hous in Naugadukas. It was a noble Lithuanian family whose ancestor Rimvydas is known from the times of the heathen Lithuania.

In Naugardukas A.Mickevičius spent happy years of his childhood and early youth. Father of a poet had fostered a deep patriotic feeling in his son. In the family A.Mickevičius acquired knowledge of people's everyday life and traditions and fondness of folklore.

In 1808-1815 A.Mickevičius went to the district school of Dominican monks at Naugardukas. ater gaduating from the school he entered Vilnius University. In the first year A.Mickevičius attended lectures at the Physics and Mathematics Department, but later he passed on to the Teacher's Seminary of Literature at the Free Arts Department. The University gave to Adomas Mickevičius an excellent humanitarian education, the perfect literary schooling, and taught him foreign languages to which he attached much of his attention later. In 1817 a secret society of Philomats was organized in Vilnius University, and A.Mickevičius became a chair of its Literature and Moral Sciences Department.

After graduating from the University in 1819, A.Mickevičius was appointed to teach at the Kaunas district school, where he became a teacher of world literature, history, poetics, rhetoric, general grammar, political economy and, besides other duties, was a manager of the school library.

On October 23, 1823 A.Mickevičius was arrested, conveyed to Vilnius and jailed at the monastery of Basilians for his involvement in the activities of Philomats. On October 25, 1824 he was exiled to Russia. While in exile, he lived in St. Petersburg, Moscow, Odessa; published "Crimean Sonets" (1826) and a poem "Konrad Wallenrod" (1828).

In 1829 A.Mickevičius departed to the Western Europe, there he lived in Germany, Italy, Switzerland, and France. In 1831 he settled in Paris where took part in the activities of Polish and Lithuanian political emigrants - participants of the insurrection of 1831. In 1839-1840 he taught Latin literature in Lausanne, at Collége de France; later, in 1840-1844 at the same college he taught Slav literature. In 1849 A.Mickevičius edited the newspaper "Tribune des Peuples". At the outbreak of Crimean war of 1855 he went to Turkey to organize Polish troops to fight Russia. There he fell a victim of cholera epidemic and died in Constantinople on November 26, 1855. He is buried at Kraków.

Origins, life, activities and works of A.Mickevičius are closely related to Lithuania, its history and culture. A.Mickevičius considered himself a citizen of a common state of Lithuania and Poland, called Lithuania his motherland.

Slavų literatūra, XV paskaita
Early period (up to the end of the XIX century)