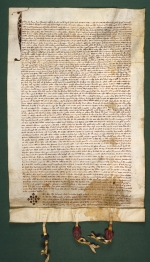 The letters of the Great Duke of Lithuania Gediminas are the oldest monuments of Lithuanian writs. They are important not only as sources of Lithuanian political and cultural history, but are also significant as examples of Medieval epistolic art.

The copies of six letters reached our times. The letters were written in Latin in 1323-1324 in Vilnius and were addressed to the Pope John XXII and to the Catholic West, mostly to German towns. The letters tried to persuade that crusaders were not promoters of Christianity, but aggressors; the promise to baptize (convert to Christianity) aimed to avoid theological isolation of Lithuanian state from the West. The letters invited to Lithuania from other countries various artisans, experts and specialists: stonemasons, millers, wheelwrights, shoemakers, silversmiths, armourers, knights, sword-bearers, farmers, fishermen, merchants, doctors. Freedom of faith and good working conditions were guaranteed for them. This proves that Gediminas was implementing a far-reaching programme of economic, cultural and military development of Lithuania. In the letters of 1323 for the first time Vilnius is mentioned as the capital of Lithuania for the first time. Since the letters were dictated by a heathen Duke and written down by a Christian scribe, their style is a blend of pagan and Christian features of thinking and speaking.