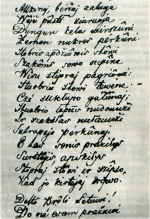 A. Baranauskas' poem "The forest of Anykščiai" is a classical work of Lithuanian poetry.

"The forest of Anykščiai" is the first romantic poem in Lithuanian literature in which images of the forest and the tree upspring to the romantic symbol of living free. The forest of Anykščiai of A. Baranauskas, being eternal and indestructible, growing again after having been hewn out and sold, "blessing the hand that invented axe", and reviving in the songs of poets, becomes a metaphor of unconquered and invincible Motherland. For the first time in Lithuanian literature A. Baranauskas praised emotional attitude of country people who preserved their native language. These are the first allusions in Lithuanian poetry to the spiritual wealth, creative potential, and moral values of country people.

For the first time in Lithuanian poetry A. Baranauskas began to speak about ties between nature and human spiritual wealth. Beauty of nature evoked creative potential and prompted its expression. Enriched by the nature, human imagination created patterns of the folk art, melodies of the folk songs and, according to the poet's words, rendered unspeakable lyricism to the folk poetry and inexhaustible source of ingenious plots for tales and legends. And on the contrary, destruction of nature's equilibrium may lead to the loss of psychical harmony and mental exhaustion.

Dealing with a totally new for Lithuanian poetry sphere of spiritual apperception and senses, the poet creatively used the resources of folk lexicon to express abstract concepts.

The poem relates the dramatic history of the forest of Anykščiai very truthfully, starting with holy woods of heathen era and ending with willful acts of czarist officials. The poem reconstructs prehistory of the forest, how it changed, decayed, and grew again. According to the people's stories, in heathen times holy woods grew there, that were destroyed after implementation of Christianity. The destruction of holy woods as centres of paganism, in poet's opinion, was not only devastation of Lithuania's splendor and wealth. He saw it as a destruction and profanation of old patriarchal morals, national traditions, foundations of folk culture and esthetics that can not be excused even for the sake of new culture.

The poem "The forest of Anykščiai" is the peak of A. Baranauskas' lifelong creative path and most prominent work of Lithuanian poetry in the first half of 19th century.

View .pdf
.epub
.mobi
About author
Antanas Baranauskas is the most prominent Lithuanian poet of the feudalism epoch's end. He was born in Anykščiai to a numerous family of "royal" (i.e. free) peasants on January 17, 1789. Read more